Magali Vaz September 2, 2012
share
It all started with the ‘beauty box’. Not so long ago, some genius came up with the idea of charging women a fixed sum a month & sending them a box of cosmetics. The main thing that made the box such a success was the element of surprise. Soon after there were all manner of boxes cropping up. Boxes for expecting & new mothers, boxes for vegans etc. (just to clarify, none of this happened in India).
I’m not usually a big fan of surprises. Sure I loved them when I was two & lego sets & Barbies were the quickest ways to make me happy. Now-a-days the generous gifts my parents give me are things that I’ve explicitly asked for, you know? But when Brown Paper Bag (my favorite blog to discover stuff in Mumbai) announced a dessert box I was instantly interested. At Rs 750 per month (you have to pay for three months), you get a box of six treats delivered to your home. This came at a time I was particularly broke but I begged my mother for a small loan & sent in my cheque.
The first box was scheduled for 31st August. I was pretty excited, but I got a call that they were experiencing some kind of difficulties & would definitely send mine on Monday. And this was after the teaser photos on their twitter page! I was pretty disappointed but the girl who spoke to me was very sweet so I couldn’t get angry or anything (besides, I was in the middle of something very important, I think I was whispering throughout the call).
That very evening past 7 o’clock the doorbell rang. Dad went to get the door, I thought it was probably the watchman. A couple of minutes later he came to the room with this lovely box. First impressions of the box – it looked very nice & so I snapped a picture before opening it. 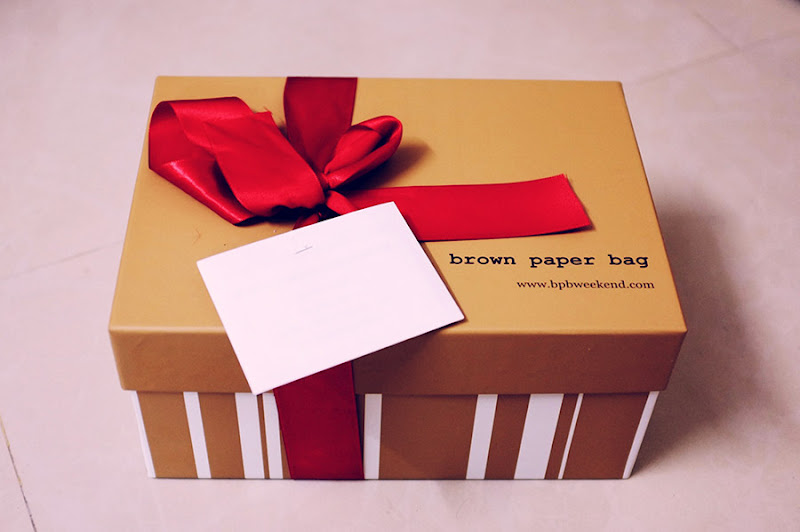 Then I opened it. The cupcakes looked so small in such a large box, but they were prettily laid out on paper doilies. A+ for presentation! 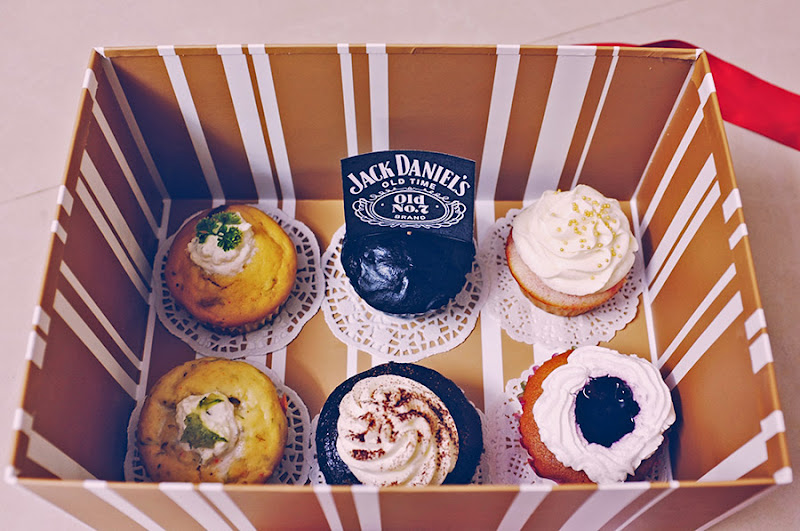 Now let’s review what was in the box. Since each one of these cupcakes were different, we made sure to cut each of them into three pieces so everyone could get a taste.
The two on the left were zucchini, olives, cream cheese and pumpkin, pumpkin seed, sage savoury cupcakes from Tout de Suite. I will not say these were badly made (they’re probably an acquired taste). They were soft but extremely bitter, I’m really don’t think they should have been in a dessert box.
The middle & right one on the top row were Jack Daniels and strawberry & champagne cupcakes from Lulu’s. We loved both of them.
And lastly, the two that remain (middle & right cupcake on the bottom row) were Blueberry cheesecake and tiramisu batter-filled cupcakes from Deliciae. These were not your conventional cupcakes because they were filled with gooey batter… very delicious. 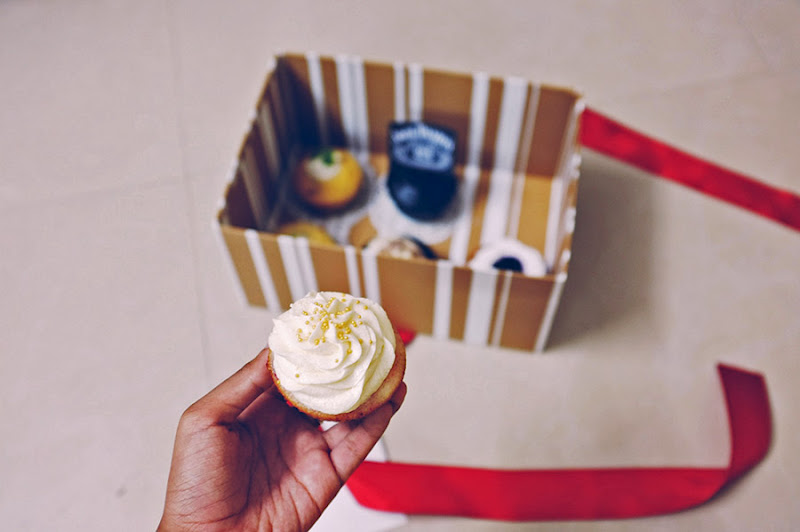 I was pretty satisfied with this box. Just a note to bpb – I don’t need a ton of sugar, but as long as you don’t spring anything bitter on me & call it a dessert, I’m good.
Can’t wait to see what they have store for me in the next box.