Magali Vaz January 31, 2012
share
When I was a kid many of my neighbors got home from school, dumped their stuff & went straight to the garden/park that our apartment complex had to play. I didn’t. There are many reasons for that really. Most of the kids from our old apartment complex were Maharashtrian. They spoke Marathi, a language I could barely understand & couldn’t really speak (even though it was a compulsory subject in school). There were other kids who spoke English but even though they were very sweet & accepting they were four or five years older than me so I couldn’t really play with them. I didn’t really feel comfortable around the rest, so I did my share of playing at school & when I got home I stayed home. I loved it because my dad brought home out first PC when I was four & so I spent my childhood being a geek, surfing Barbie.com & whatnot. I created my first Blogger.com account when I was nine (though I wasn’t serious about it or anything, boo.)
I felt lucky to be so familiar with computers from a young age. (Computer class in school sucked, it was so basic & hence insanely boring.)
But I digress. When I was nine or ten years old (I can’t be completely sure) my parents bought me a bicycle. It was a nice BSA champ, with training wheels & a basket basically the best (maybe only) kid’s bike available then, this is before all kinds of exotic brands were being imported into the country. I remember going with my mom to pick it up from the shop. I remember him installing the bell & us excitedly taking it home. I loved the bicycle. My parents tied a lovely multicolored plastic pinwheel to the front of it & I took it down in the garden many times. I loved it. But soon later I forgot all about it & it just lay in the balcony collecting dust.
When we moved out of our old house into our new one almost four years ago the bicycle stayed there. I felt so guilty about the bicycle just lying there. I made the decision to give it away to a cousin, she had a lovely pink Raleigh bicycle but it was smaller than mine & at ten years old she outgrew it.
So last week mom & me went to our old place & took the bicycle out. We were so happy to see that other than a little dust the bike was in perfect condition. We dusted & oiled & took it to a bike shop as well. He checked it out & refilled the tyres. Then, roughly ten years after the bike took a rickshaw ride to our home it took it’s second rickshaw ride to my cousins home. I snapped this photo below with my iPhone just before we knocked on their door (sadly it is the only picture I have of the bicycle, at this point I felt very sentimental.) 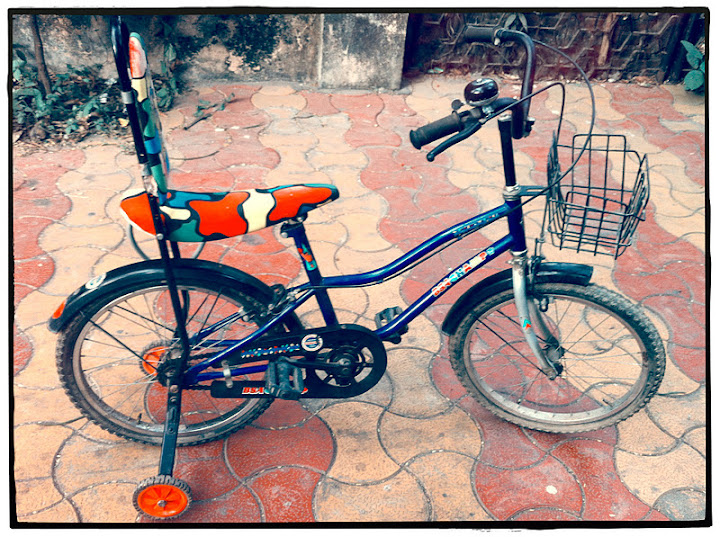 Soon my cousin was riding it all around the place. And it felt right. Somehow I think that just like toys in the Toy Story films, bicycles too have feelings & souls & are only happy when someone is riding them.
I now dream of getting myself a lovely beach cruiser & riding it around in Goa. I have a Pinterest board filled with cruisers & other bicycle stuff. There is only one problem- I never took the training wheels off my childhood bike, so I never learnt to ride. It’s something that I’m embarrassed about. I wonder whether it’s possible for someone almost 20 to learn to ride? It scares me but it’s still something I want to do. Is there anyone reading this who doesn’t know to ride? How did you learn? I happen to know very funny anecdotes from when my parents were learning to bicycle as kids.