Magali Vaz March 19, 2013
share
I remember exactly how I felt last February when I heard the first conclusive news about the Vespa launch in India – positively euphoric. I’ve always been drawn to well designed / classic / iconic things, & I figured from then it was just a countdown to when I would own one. And then the month they were launching I went out & bought a miniature to remind myself of what I would be getting soon. I didn’t for a minute consider that my mind would change someday. It was a dream I had for years – I’d save up, go to riding class, save up some more & finally book one. It was all planned out, set in stone if you may.
Then I saw their facebook & twitter updates. They didn’t behave like I imagined a company of such stature would. I mean I know this was Vespa India, but it was in partnership with Piaggio Italy, so they wouldn’t mess up, right?
Then I saw their first commercial in India. It was one of the most distasteful, horrible things I had ever seen, so I blogged about it. I hated the direction they were going with, but even this wasn’t enough to make me reconsider eventually buying the scooter of my dreams. But this is when I unfollowed & unliked them on all their social media pages. Besides, their only social media strategy seemed to be taking photos of Vespas (especially Italian ones) off other various blogs & websites & sharing them, mostly without credit. Also there was almost nothing about actual Indian Vespas, they seemed to be relying too much on the iconic status of Vespas internationally.

Last night I saw one of my friends ask them a question about a miniature Vespa they posted about. And then I saw this tweet- 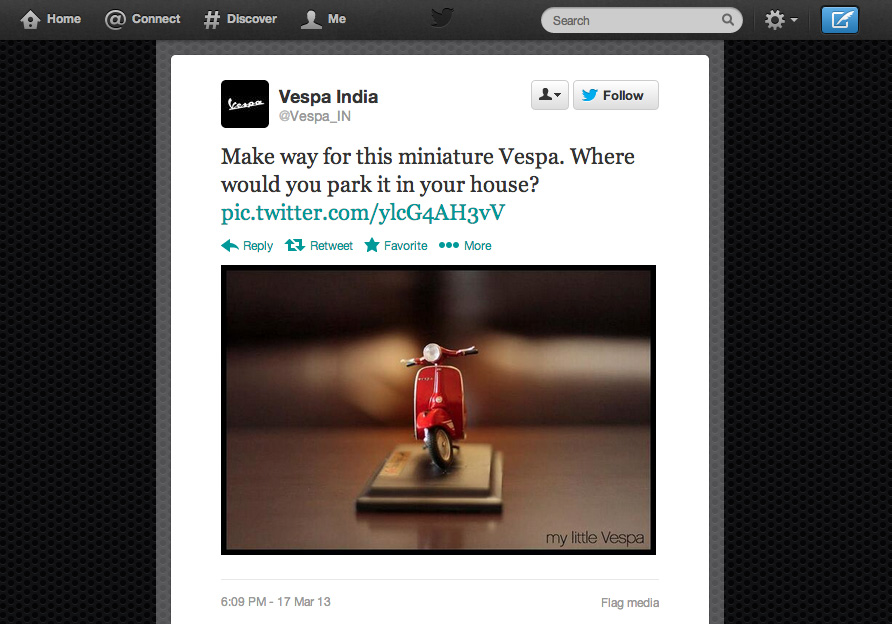 link to tweet they have taken down the tweet
I was absolutely disgusted. They had stolen the photo from the My Little Red Vespa I did here on Life etc. 11 months ago. Not only had they taken it without credit or permission, they had added a border & text to it. I asked them to post attribution or take the photo down (& apologize too). But by then it was 11PM so I knew nothing would happen soon.
Acting on a hunch I decided to go & check out their facebook page. And then I saw this- 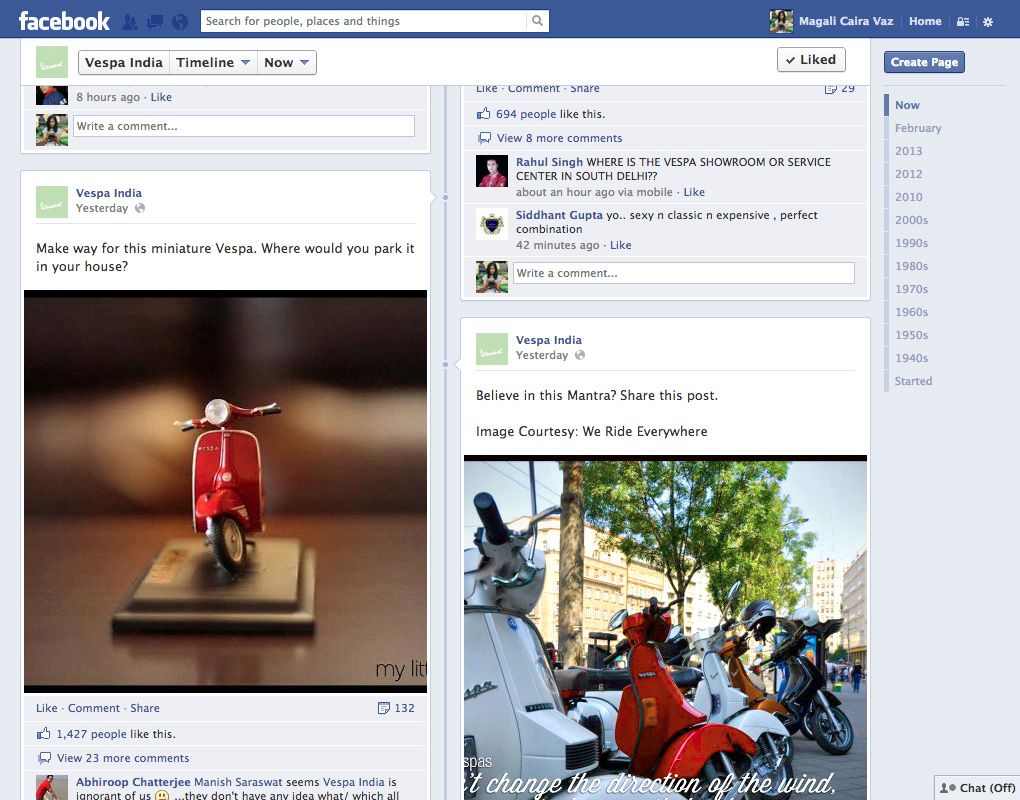 They had posted the same image to their facebook page as well. Again without any credit or attribution. 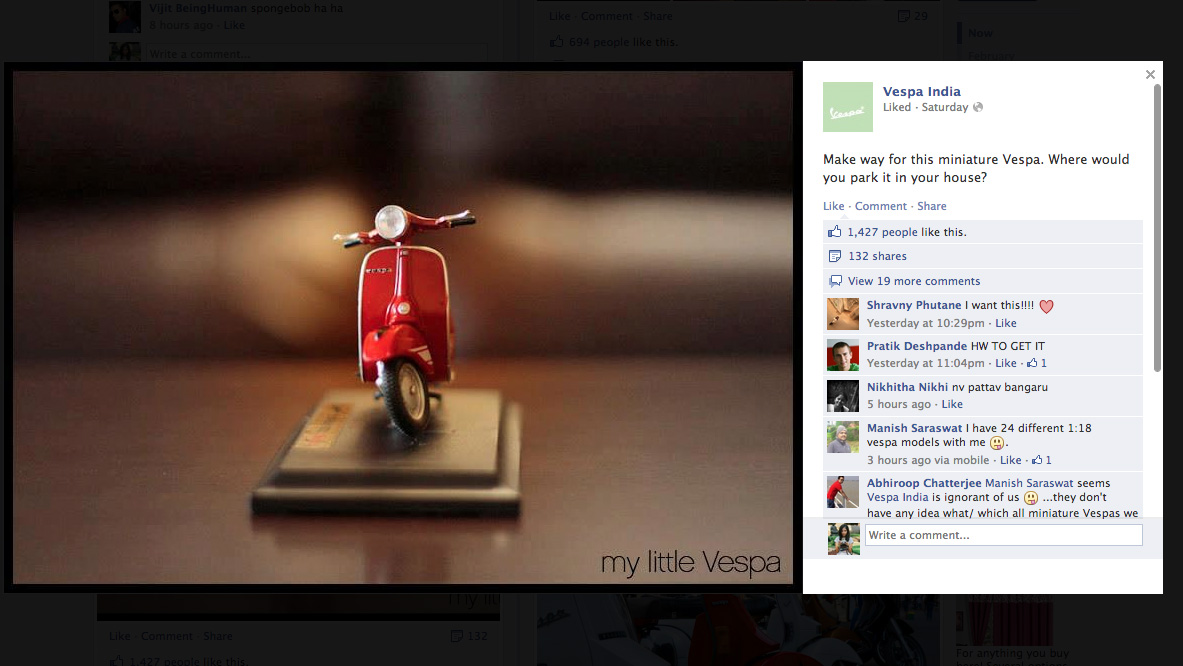 @magali_c Ouch. More proof that @vespa_in is the most unprofessional company in the vehicle space.
— Nigel Britto (@NigelBritto) March 18, 2013

You see, I’ve known Nigel for a while (over the internet) & I know that he owns a white Vespa. All this time I thought Vespa just had terrible PR / Social Media people but turns out the scooters are terrible too – they give a lot of trouble & the customer service sucks. And to think that I was seriously saving money to get one in a couple of years, yeesh. I’m glad I got saved, because buying one would have been a pricey mistake.
Getting back to their social media behaviour. It’s so funny that they keep posting about Vespa miniatures & not getting back to people who have genuine queries about them. The question they get a lot on facebook is where one can buy a miniature like this & they either ignore the person or give evasive, ridiculously unhelpful answers. For example, one of my friends asked them on twitter where one could buy this & they replied, “You can get some cool Vespa merchandise at a dealership near you.” I am familiar with their actual puny merchandise range & it includes some t-shirts, bags, keychains & overpriced helmets. They do not have miniatures. I bought my miniature from Maisto, a company that specialises in scale models of various vehicles. It’s a cute miniature, nicely priced & I happily display it on my desk – earlier it was to remind me of what I’m saving up for but now I’m thinking I should go out & buy some more miniatures & put them all over my room, to get over the fact that the Indian agent of my dream scooter seems to be run by a bunch of tasteless idiots & miniatures might be the only Vespas I’ll own in my life.
The Vespa India people are definitely going to run the brand into the ground in this county – Vespa Italy, are you listening?
Regarding the social media aspect – you’d think with these constant gaffes, a 12 year old was handling their 3 lakh strong Facebook page (no offence to smart 12 year olds everywhere). But no, their page is managed by OgilvyOne India a faction of the world-famous Ogilvy & Mather advertising company. OgilvyOne worldwide have branded themselves as ‘The World’s Pre-eminent Customer Engagement Agency’. So this is what an agency like that does? For shame! David Ogilvy would not be pleased.
Also an honest question to fellow bloggers reading this – do you think I should start putting watermarks on my photos? I used to do that when I first started photoblogging back in 2009 but stopped because I really didn’t like the look, to me it spoils a photo. But almost all of my friends (both in real life & one social media) have been telling me to do so but I hadn’t started yet. But apparently you cannot even expect anyone, even big, company with even bigger reputations to respect intellectual property right of artists, photographers & other content creators. I’m well aware that scum like this can easily edit out a watermark (seeing as how they added text to a photo of mine, something I’ve expressly forbidden on my FAQ page) but I’m wondering whether a watermark might make them think twice about it? In other news, I’m seriously considering making a blacklist of brands that do something like this, either on this blog or on the Life etc. facebook page because the last time something like this happened to me I heard from a lot of other bloggers who went through the same thing.
I’m still waiting on them to take my photos down on both websites, I will make sure they do it. Let’s see where this goes, I will keep this post updated.

Update – I can confirm that Vespa India has taken down the offending image from their facebook & twitter pages & sent me an apology email as well. It definitely doesn’t make image theft right, & of course their fans on facebook do not know what they did etc. but it’s a step.
They also promised that they have taken steps to ensure nothing like this happens in the future & I hope they mean it. So Indian bloggers who are reading this, if any brand does something like this to you, feel free to let me know via the comments on this post or twitter (@magali_c) & I’ll do everything I can to help.