Magali Vaz March 26, 2014
share
In case you missed it, I flagged off #Waffleweek yesterday. The first post had a chatty video with me talking about waffles, why I love them & showing you my new waffle maker. I promised to go into more detail in subsequent posts, so today I will be reviewing the Severin Waffle Maker from Zansaar.
So, I’ll start at the beginning- late last year I decided to buy a waffle maker. So I started to search on online, I was pretty sure there would be a good selection. But all I could find were these two- Bajaj Majesty SnackMaster Super Dlx Grill // Morphy Richards Toast Grill Waffle. Bajaj & Morphy Richards are owned by the same people in India, so these are essentially the same thing, just that MR would be slightly fancier looking & pricier. I put that on hold & went to Foodhall in Mumbai that stocks a lot of imported kitchen appliances (like the Kitchenaid). I was really looking for a good quality waffle maker, preferably something heavy & well made that would last. But I was disappointed to find they had the same Morphy Richards one mentioned above so I just came home & ordered the Bajaj one online.
It came a few days later. As I’m not reviewing the Bajaj waffle maker in this post, I’ll just give you a brief account of how that one was. The plates are metal, of course, but the exterior feels like a very cheap, flimsy plastic. Parts of it just warped the first time I used it, from the heat. It doesn’t have a temperature control & obviously didn’t get hot enough. Even after 15+ minutes, the waffles were always so light in color & very soggy. Not to mention, it felt like it would fall apart every single time I used it (it hasn’t yet, though) I used it three to four times for waffles, trying every trick I could think of, really wanting to like it but I just didn’t. It wasn’t money completely wasted though, because I found I really like the grill function for sandwiches / bagels. But I knew I would have to keep looking for a better waffle maker. I mentioned waffles a few times then & some of you asked me to review the waffle maker but since I wasn’t happy with it then I didn’t.
That’s when I found the Severin Waffle Maker on Zansaar. It’s not the cheapest device (but not expensive either, I’d say mid-range?) so I did my research first. It’s from Germany, so the voltage is already right (220V). I’ve bought baking supplies from Zansaar before & have been satisfied with both the products the quality of products they stock & their quick, efficient customer service I decided to give it a go. 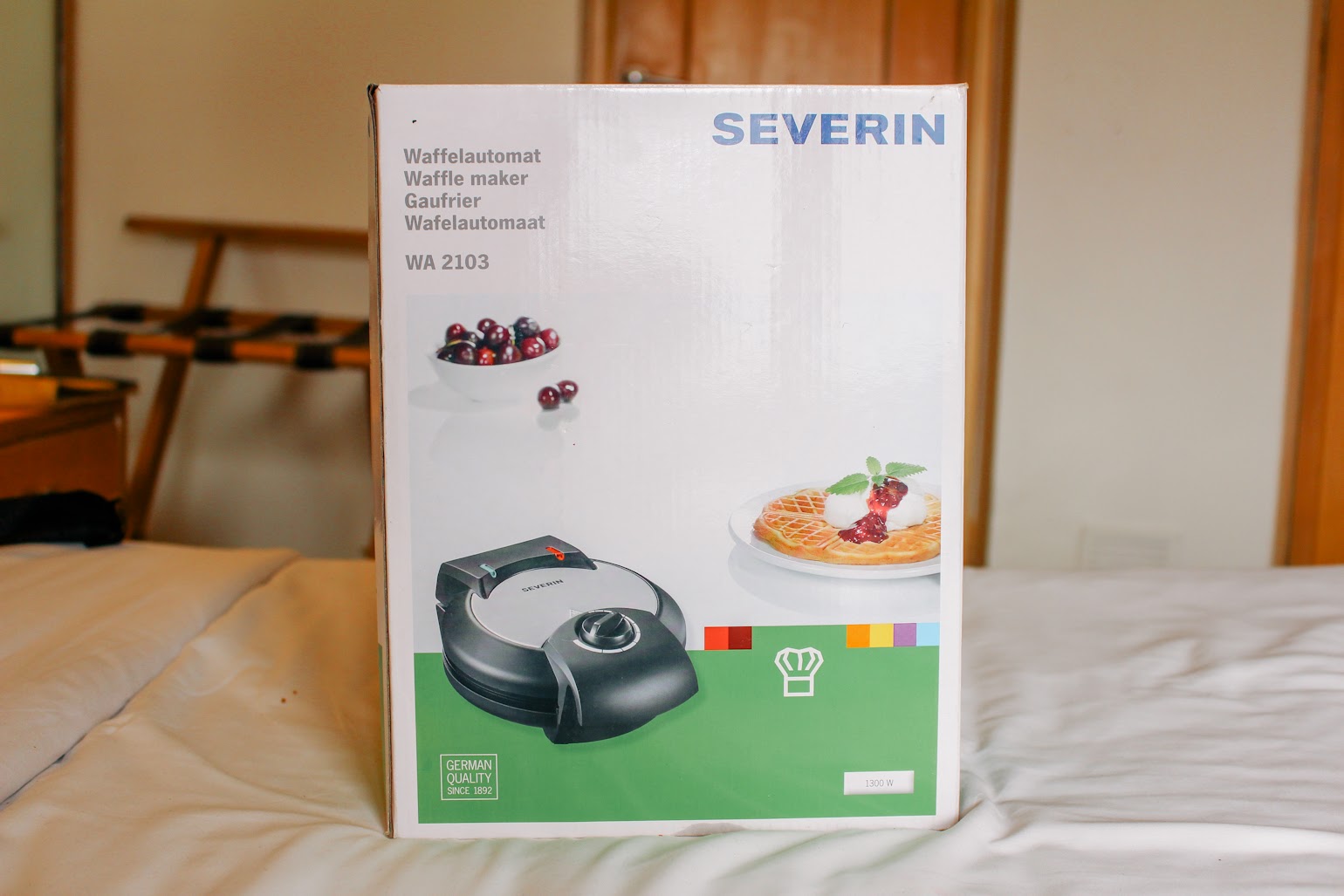 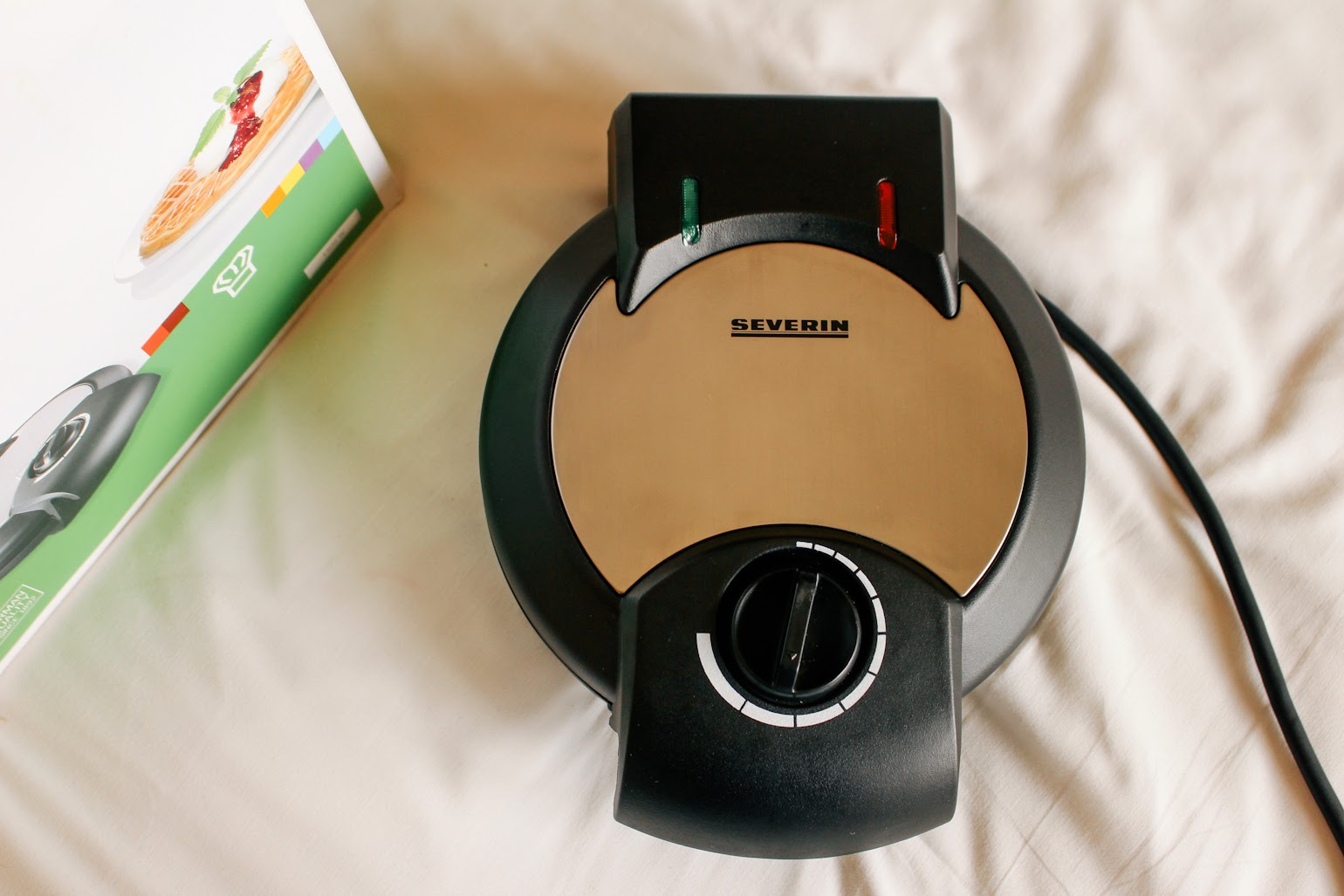 I was on pins till I received + tried it, I really didn’t want another dud waffle maker. But, (& I don’t mean to sound cheesy here) it pretty much turned out to be the waffle maker of my dreams.
It’s made of mostly plastic with teflon coated plates. Parts of the exterior are plastic & the top is brushed aluminium. It feels sturdy & well made, both inside & outside. And no warping, thankfully! It also has a handy temperature control. I couldn’t find any documentation on the maximum temperature it heats up to, but I once (mistakenly) had it on the highest setting from the beginning & my waffle got burnt in three or four minutes, so I’m guessing it can get pretty hot! I like keeping it on medium & it gets done it about ten minutes, if I am in the mood for a more brown, extra crisp waffle I turn up the heat in the last couple of minutes. 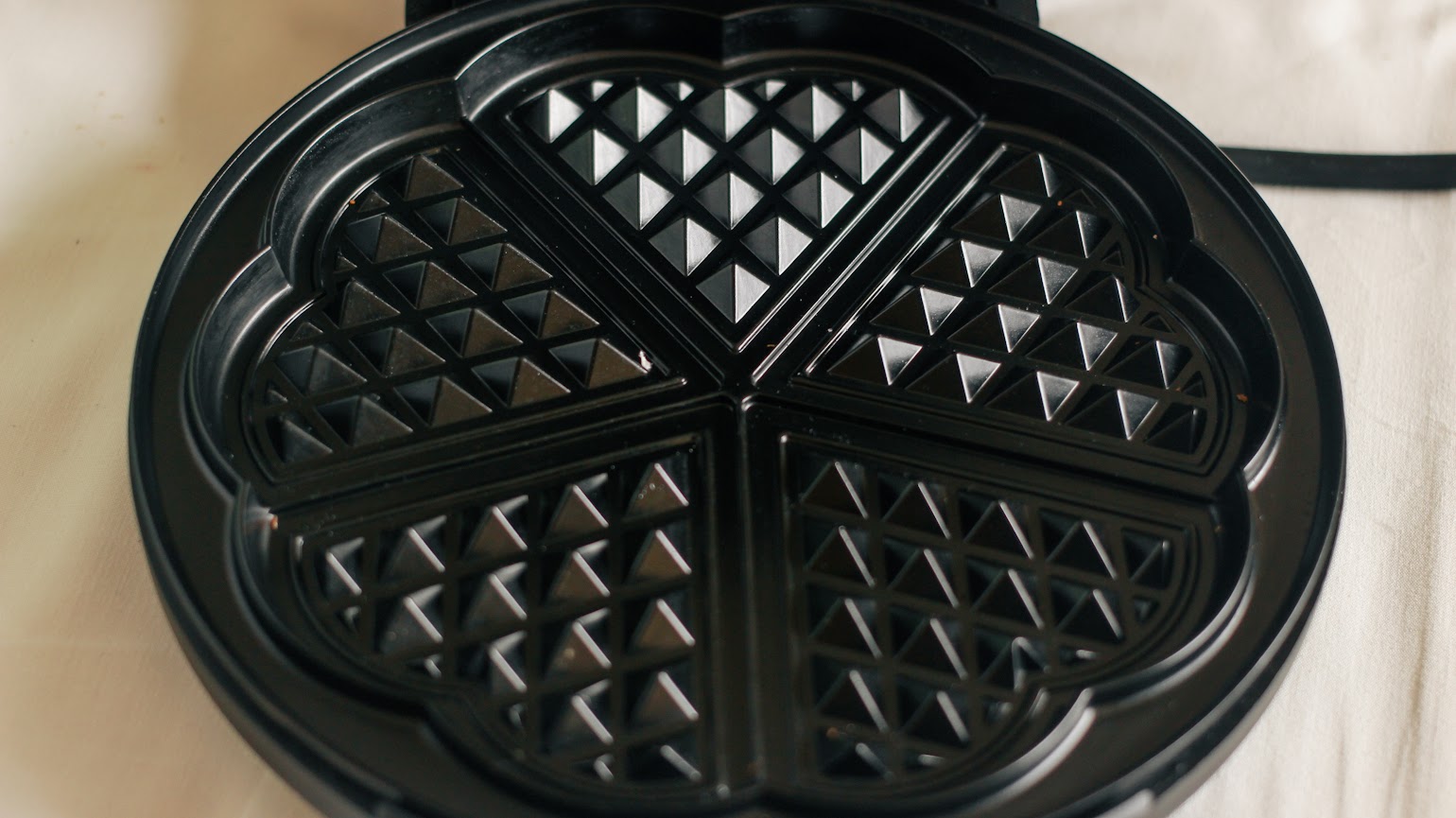 It’s very easy to clean, just wipe with a paper towel! I’ve found only two ‘cons’ as of now. Firstly, the power cable could have been longer. If the table you’re keeping this on is not close enough to an outlet, you’ll need an extension cord. And the second is less con & more personal choice. The waffles this thing makes are on the thin side, much thinner than classic or belgian waffles. Mom & me like this kind best, but my dad prefers Belgian. Overall I am very happy with this waffle maker! 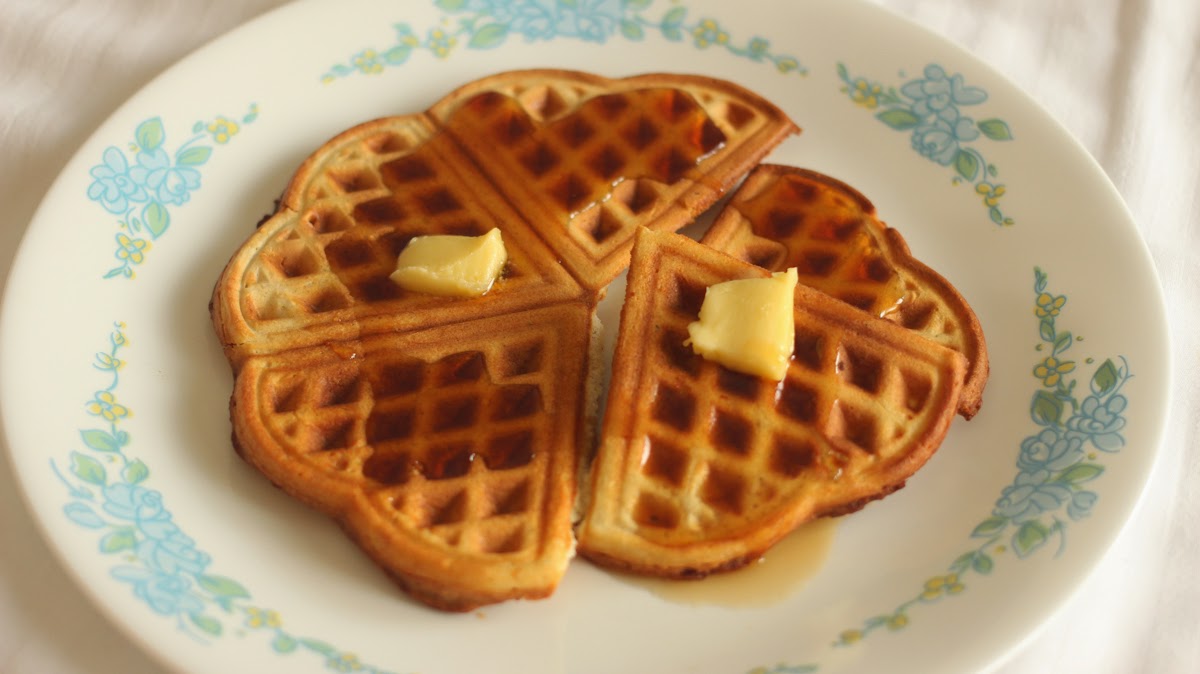 Easy Waffle Recipe-
It’s super, super easy (pretty sure even a kid could make it) & basic. And it’s not like baking a cake (i.e. it doesn’t need precision) so you can play around with it in many different ways. Think of it as a starting point. And if you’re more visual, you can see the recipe in action in this video (post 6:06).
Ingredients:

Equipment:
Large mixing bowl
Whisk (if you don’t have one, a fork will do.)
Procedure:
Before you start, it really helps to warm the milk ever so slightly, also please take the butter out of the fridge so it’ll be soft & mix well.
Crack open the eggs & beat them till they’re fluffy. Add the flour & mix.
Now add the milk & mix. Add the butter & mix. Add the baking powder, sugar, salt & then mix.
Next, add the vanilla extract, cinnamon & nutmeg & mix.

Your all done! Now just preheat your waffle maker, pour & wait! I find that I prefer slightly runnier batters as opposed to thick since runny ones self-level, which helps in the whole thing being even. As you can tell, I’m not used to writing recipes, but this one should be simple enough to follow. 🙂

If you have any questions, feel free to ask me! The review of the waffle cookbook goes up tomorrow.

What’s in my Bag | The Trunk Label Tessa