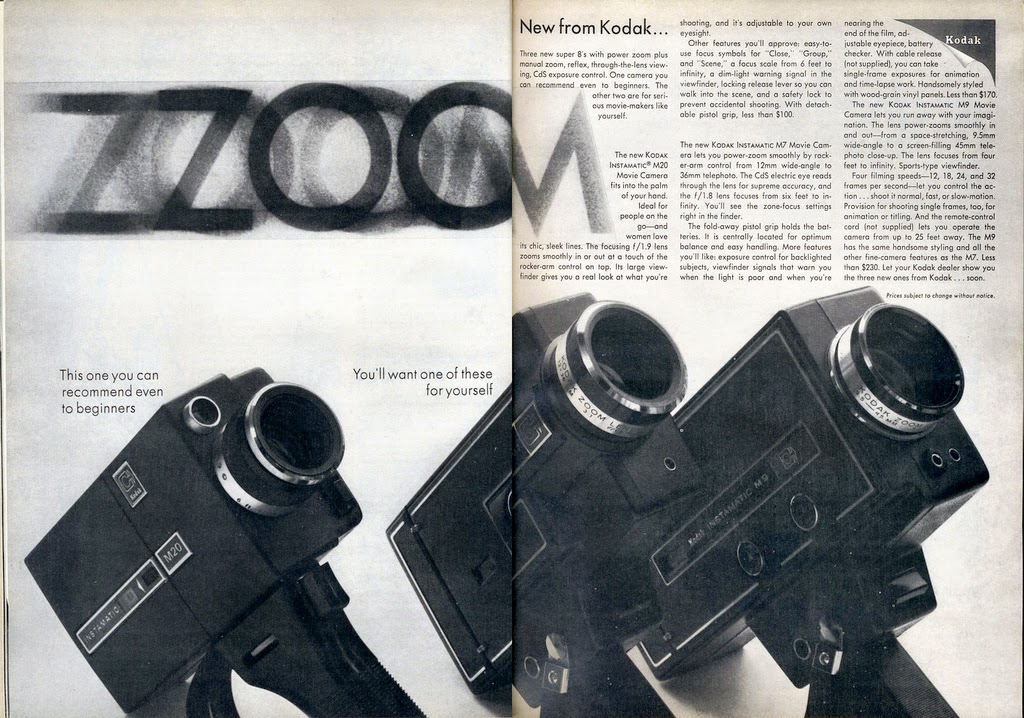 Released in 1965, the Super 8 motion picture format can be called the predecessor of the VHS tapes. It was developed by the American company Eastman Kodak as an improvement over the cumbersome 8 mm film. The Super 8 featured an 8 mm wide, 50 feet long film reel which was preloaded into a specialized light-proof plastic cartridge. The special cartridge removed the age old problems of manually threading the film reel onto the camera and is also one of the fastest loading films ever produced.
The film itself was an improvement over the standard 8 or the double 8 and featured smaller perforations that allowed for a wider exposed area. The super 8 also featured a relocated magnetic sound strip opposite the perforations which allowed better quality sound recording than its predecessors. The wider exposed area allowed a better color composition and provided smaller grain with finer edges. The super 8 was highly popular during the late 60s and the 70s before being replaced by VHS in the late 70s. Super 8 was also responsible for the outburst of home movies and amateur cinema throughout the 70s era and featured some memorable silent movies. Listed below are the few of the best movies shot and released in an 8mm or Super 8 format.
1. It’s About You (2011)
Released in January 2012, It’s About You is a musical documentary that portrays the life and times of the American singer/songwriter, John Mellencamp and is produced and directed by Ian and Kurt Markus. Although released recently, the 90 minute long documentary is shot entirely on Super 8 for a stylish, home-movieesque grain and visual effect. The movie was shot during Mellencamp’s 2009 tour with Bob Dylan and Willie Nelson and also focuses how Mellencamp recorded his new album in during the month and a half long tour.
2. Brand Upon the Brain (2006)
Directed by Guy Maddin, Brand upon the Brain is a silent horror/thriller film shot entirely on super 8. The story is divided into 12 chapters and focuses on the fictional life of Guy Maddin. It premiered at the 2006 Toronto Film Festival and was accompanied with live music and orchestra. The film’s screening also featured a list of celebrity narrators such as Crispin Glover and Isabella Rossellini.
The movie is an excellent crossover between fantasy and horror and a brilliant avant-garde cinema experience.
3. Things (1989)
If cheesy visual effects and low fidelity footage from the 70s and 80s is your thing, that you shouldn’t miss watching the 1989 Canadian horror flick, Things. Written and produced by Andrew Jordan & Barry J. Gillis, Things focuses on a fanatical husband who performs several dangerous experiments on his wife. It follows a typical, experiment gone horribly wrong plot and has a strong cult following.
The movie was shot on both 8 mm and 16 mm films pays homage to the iconic horror films like Night of the Living Dead, Evil Dead and Last House on the Left. While it is often considered as one of the worst movies ever by critics, the movie has garnered several fans over the decades.
4. Nekromantik (1987)
If you’re looking for a movie that defines cult cinema then the 1987 West German movie Nekromantik is your pick. The movie was directed by Jörg Buttgereit and focuses on a majority of transgressive topics like necrophilia and masochism. Although the film was banned in several countries upon its release, it hardly faced any major reprisals despite of its mature and counter-culture subject-matter. Most critics in Berlin gave a positive review of the movie describing it as artistic and taboo-breaking.
5. Super 8 (2011)
Produced by JJ Abrams and Steven Spielberg, Super 8 is a science fiction/horror movie released in
2011. The movie plot focuses on a group of teenagers who were making their own Super 8 home movie when they encounter an extraterrestrial being. Despite of the title the footage in the movie was shot using a 16 mm. The idea of using 8 mm footage was disregarded due to the extremely grainy picture and problems with incorporating CGI. Nevertheless, the footage in the movie
replicated the Super 8–style picture with added CGI effects.
While there are several movies that were released in a compressed 8 mm and super 8 formats, the above mentioned movies featured super 8 footage. If you have a box full of old 8 mm films, it is always the best to convert 8mm to digital media to preserve your collection.
Author Bio:
Luke Peters is an avid movie enthusiast and critic and is the current contributor for several websites and blogs related to cinema and filmmaking. He likes spending his free time exploring and watching international cinema and likes to keep up with the latest news and reviews in the industry.

What I Wore | Sightseeing in Jaipur