Magali Vaz February 5, 2015
share
Pizza Express needs no introduction. One of UK’s most famous casual dining restaurants, they opened their first outlet in Mumbai in December 2012 & they already have six restaurants across the city!
I almost went to Pizza Express a few times, but then I didn’t. Something always came up (you know how it is) & I never managed to make it there, despite staying just 2.5 kms from one of the larger outlets. 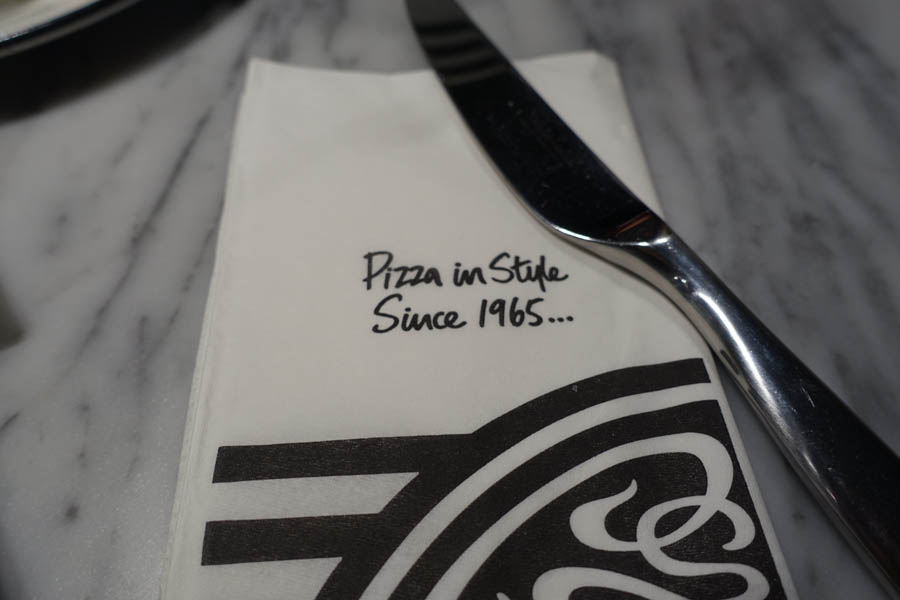 That finally changed last month, when I went to try out their new winter menu additions. There were 3 non-dough based starters, 1 new Romana pizza, 2 fresh new salads and another 2 premium gelatos to try. The restaurant is so classy, I loved the black & white color scheme & all the other little details. 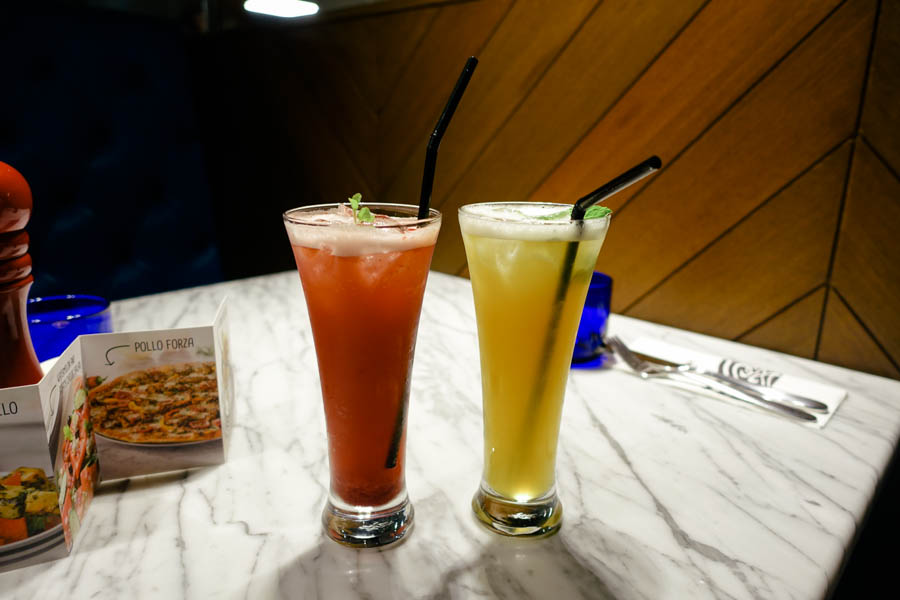 We started with soft drinks, the Berry Fresca & Sunrise Ice Tea.  I loved the Berry Fresca, it was minty & refreshing while mom loved the sunrise ice tea (so called because it has both orange & pineapple juice. I think both will be especially great in summer! They also have a bar menu with some nice Indian & Italian wines, served by the glass or bottle. 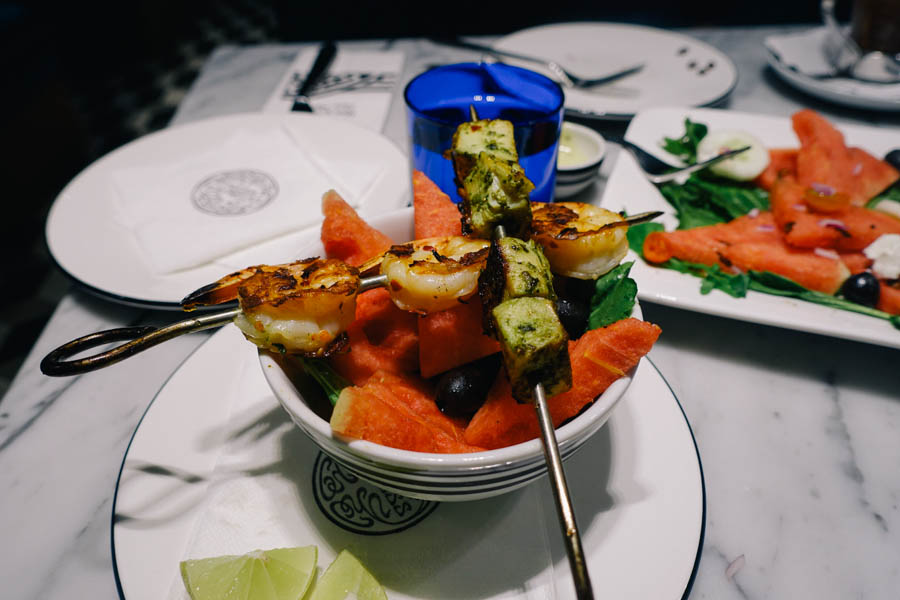 Next, onto the starters.  What you see above is a mix of Spiendini di Pollo & Spiendini di Gamberro – they are two separate dishes (Pollo is chicken & Gamberro is Prawns) served the same way with watermelon, olives, rocket leaves & lemon. Each dish comes with two skewers so we asked for one of each as we wanted to try both. I liked both of them – the chicken was really tender but Spiendini di Gamberro was my personal favorite! 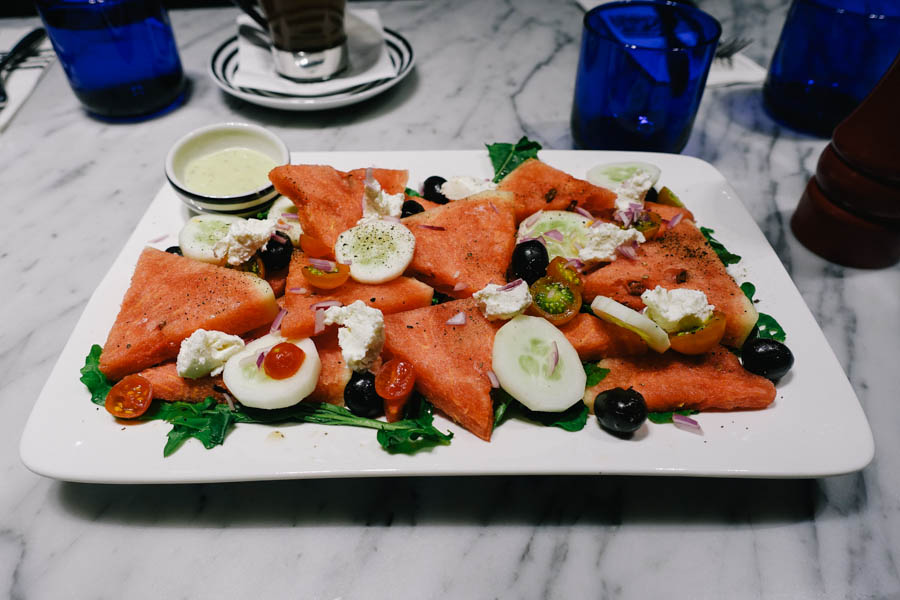 Next we moved onto the two new Main Salads – suitable for one person as a main dish or for sharing between two. Luckily I had mom aka crazy salad lady along with me! First up was the Watermelon & goat cheese salad with black olives, rocket, cherry tomatoes, cucumber, red onions & house dressing. 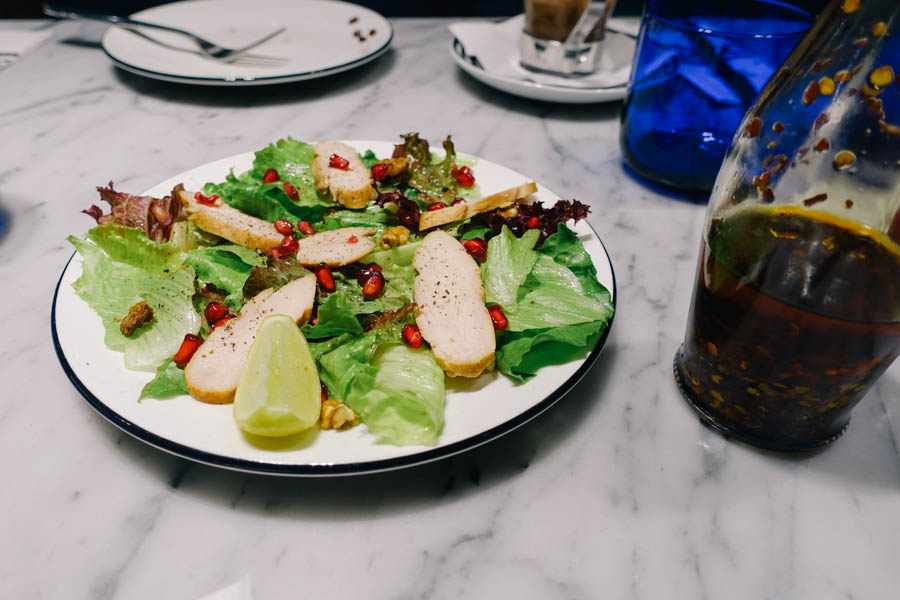 We asked for a tasting portion of Pollo Affumicato because there was no way we would manage to finish the whole service (it’s huge!) This one has smoked chicken, walnuts, pomegranate & two kinds of lettuce; it ended up being one of my favorite dishes from the evening! 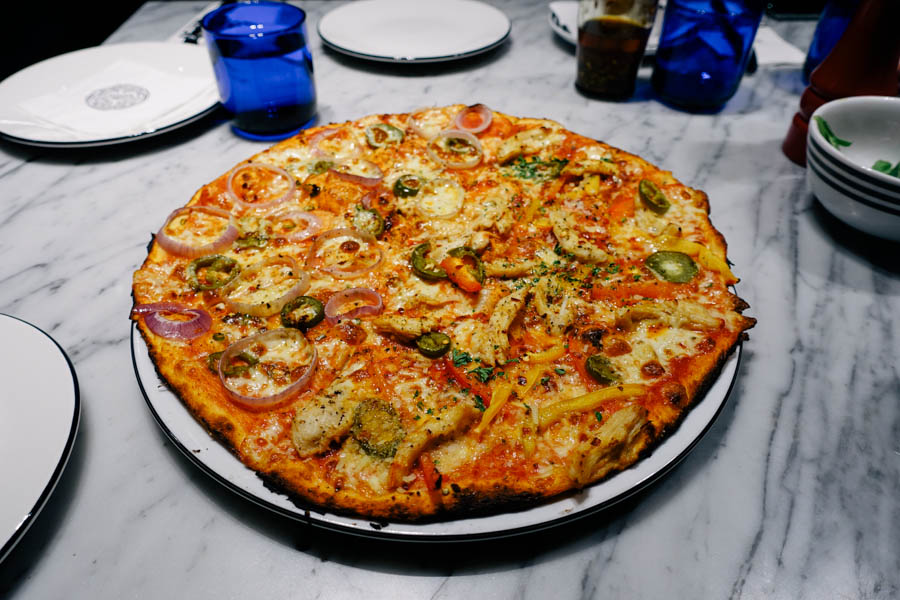 Finally onto the star of the evening, the Romana Pizza! The crust on the Pizza Express Romana Pizza is one of their signatures, thin  but still hearty, I love how you could still fold it without it cracking!
Pizza Express does this thing where they bake two different pizzas onto one base upon request, which is a great way to taste two different pizzas. Above the left side is Pollo Forza & the right is Cipolla Picante! The Pollo Forza was just about everything a pizza should be, cheesy but still light.  The Cipolla Picante was fresh & delicious too, even though I’m not the biggest fan of vegetarian pizzas but if I could do it over I’d ask them to leave out the green chilly (only because my tolerance for spice is quite low). 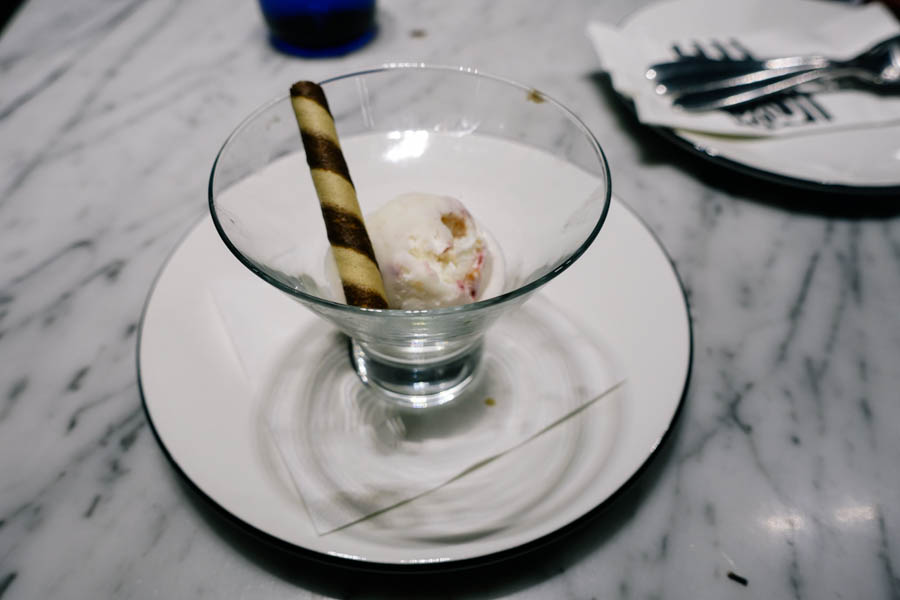 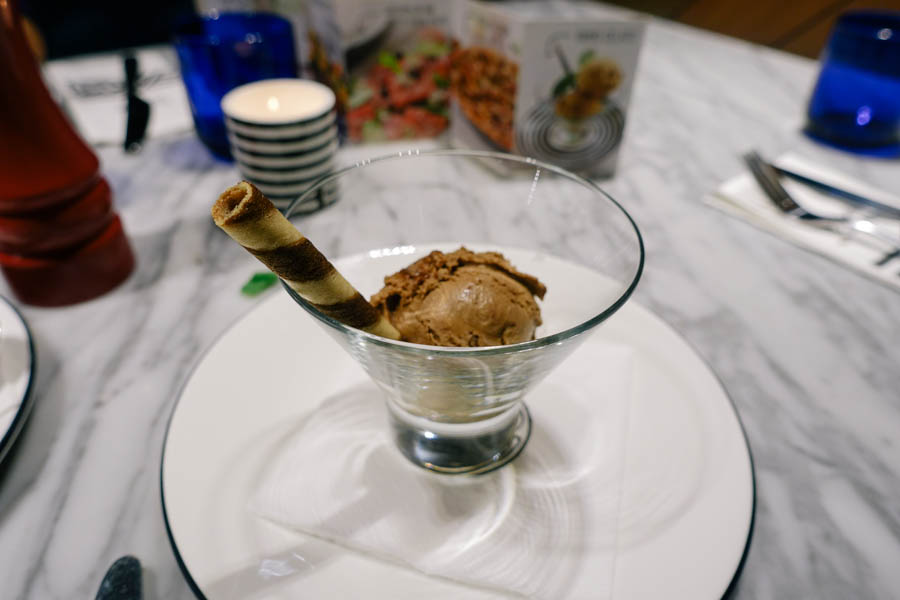 and Mocha Almond. One serving is two scoops but we asked for one each & making me choose between the two would be like Sophie’s choice. Both were SO creamy & delicious. 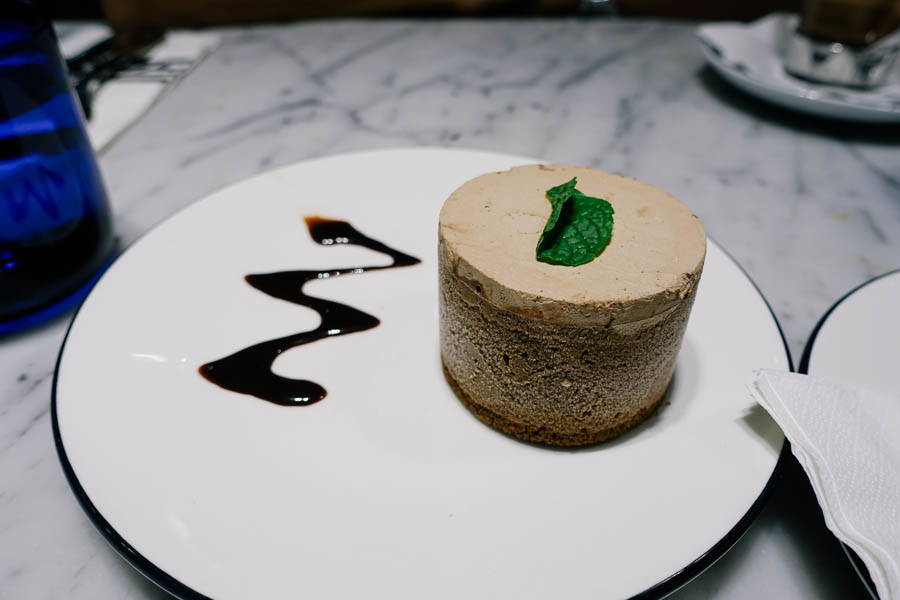 And now for the last dessert, the Belgian Chocolate Semi Freddo. We actually had the friendly chef come over & explain this to us- 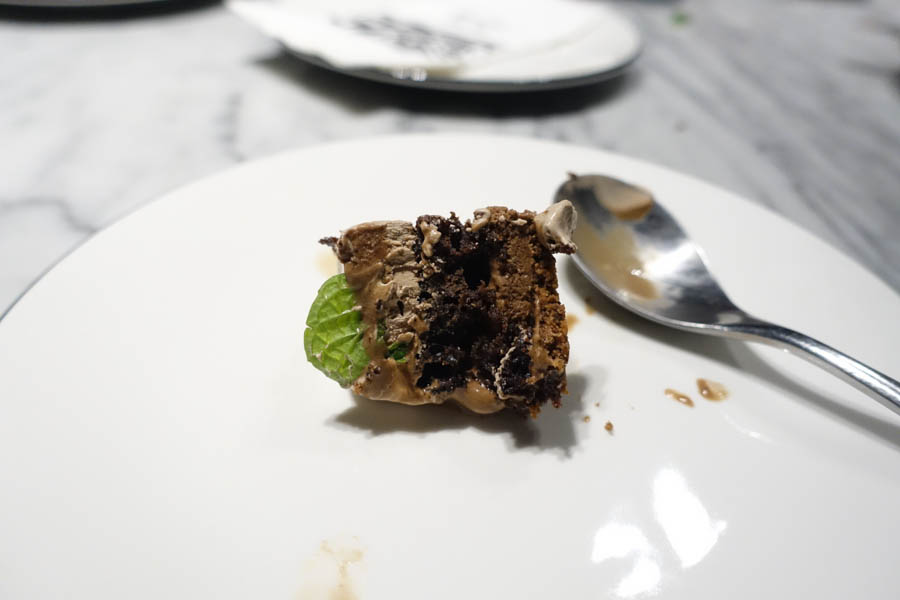 It’s a crunchy biscuit base, topped with semi freddo & sandwiched with a moist sponge layer & gelato. It comes over very frozed, but can be eaten as it thaws out.
This is probably the most I’ve eaten in a single sitting in recent times, but even after ploughing through most of it I didn’t feel too heavy or stuffed, I guess that’s the magic of Pizza Express! My favorites from the evening remain the Berry Fresca, Spiendini di Gamberro, Pollo Affumicato (salad), Pollo Forza (pizza) & the creamy Primo Gelatos. I also absolutely enjoyed the ambience & attentive, friendly service.
I think Pizza Express is the perfect place to celebrate occasions, but it’s also a lovely place to just have a casual meal! (#TreatYoSelf!)
Pizza Express, Unit 2, B Wing, Times Square Building, Andheri Kurla Road, Sakinaka, Andheri East, Mumbai
You can find the locations of all Pizza Express outlets in India (currently Mumbai & Delhi only) you can check out the locations on their website.

What I Wore | Paper Cranes