I know I’ve been kind of quiet here the last weeks. I promised to do ten posts in December but didn’t quite deliver, that’s old news right? 2018 so far has felt pretty slow even though we’re already quite into the new year (also this blog quietly turned on the 5th of Jan). I was sort of taking it very easy over the new year lull, but then a lot of (good) things happened very fast & I wasn’t left with much extra time on my hands.

Contents
Varying PacesHighlights of DecemberEtc.Lessons I learnt from 2017Looking Forward To

But I’m here now, & it’s about time I write my December wrap up. I did one of these posts for every single month of 2017, even though I was late on some months & combined June and July, so it’s very satisfying to work on this post too – they’re one of my more self indulgent series & I definitely plan to keep this going into 2018 too. But as usual, I’m getting ahead of myself.

I started December fresh off a relaxing holiday. I was very charged up & enthused at the start of the month, & just felt like I had a lot of momentum & wanted to channel that into more regular creative content. Well long story short, that didn’t happen. About mid way through the month, I lost some of that momentum & just kind of fell into a slump. It’s easier to explain away times you’re feeling low & unproductive if you have a tangible reason for feeling that way, but I spent time feeling sad & negative and couldn’t really figure out why. But, I decided to just go with it & take it slow. I do feel guilty about not being as consistent as I’d like, but I’d rather write & create from a genuinely happy & passionate space, you know?

December did have some really memorable days – The first highlight had to be meeting Shruti from StyleDestino, (the badass in the snapback standing next to me at the top of this post! a vegan luxury fashion blogger that I’ve known for ages online. She’s the most committed vegan I know & I’ve actually learnt a lot from following her on instagram. She passionately champions everything vegan, sustainable cruelty free, not just in food choices but also with regards to fashion, cosmetics & other luxury spheres. She’s currently based in Dubai but was in the bay for a bit & suggested meeting up & doing a vegan food trail of the city.

Although I’m not turning vegan anytime soon, it was still really enriching to hang out with her & look at things from a different perspective for a day. It was enriching & fun & I even vlogged the day – we’re definitely going to try & plan something else the next time she’s here.

Also in December, we attended our first Pet Festival in Mumbai! I had been excited about this ever since it was announced much earlier in 2017, had even booked tickets for mom & me a few months ago. Last minute, dad said he wanted to come too so the three of us took Thelma & went! It ended up being pretty dog centric; mom & I even had to carry Thelma because of how angry & nervous the dogs made him (& a labrador that came too close got a swift, hard slap). But overall he was such a star & got so much attention! 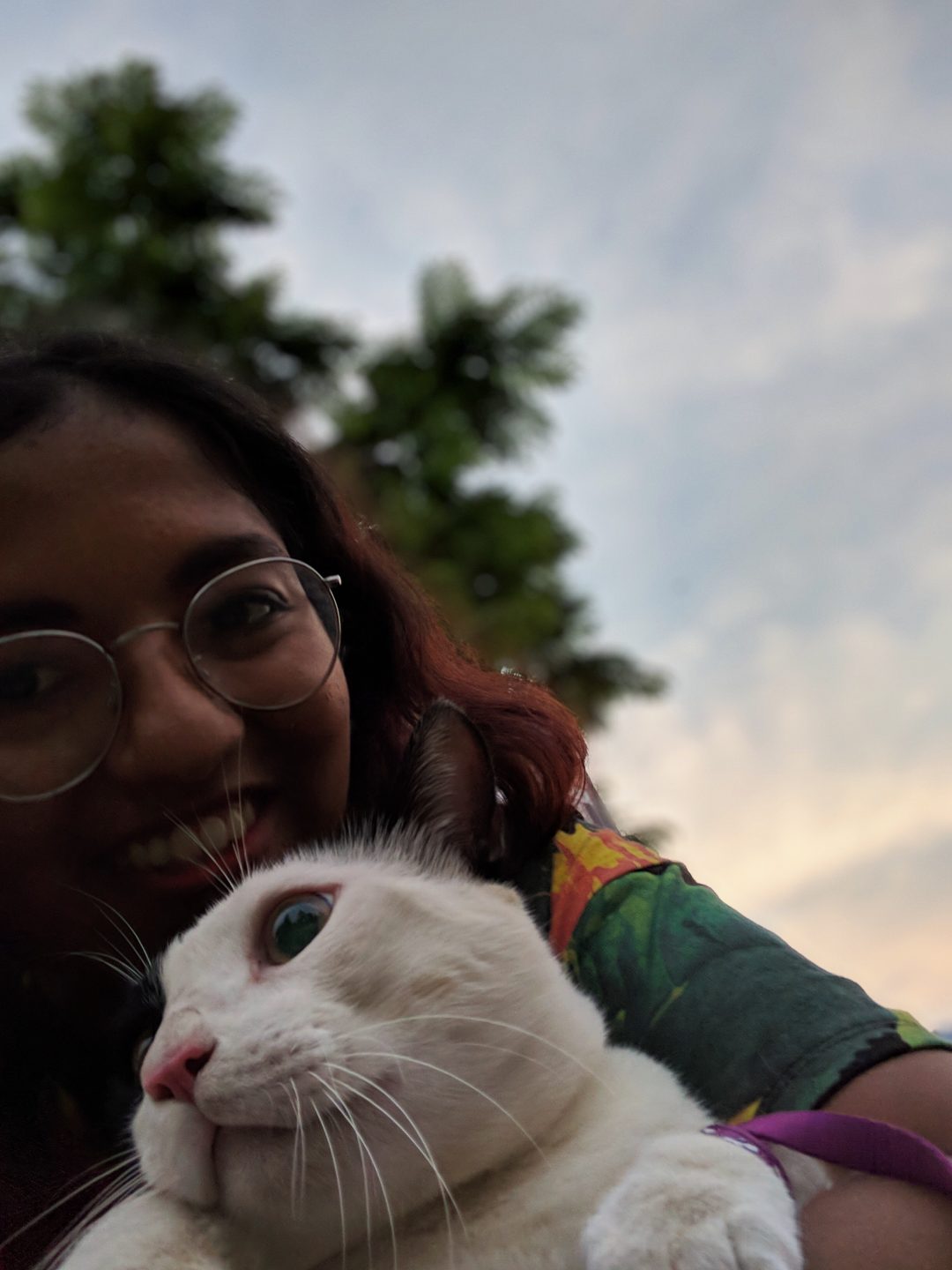 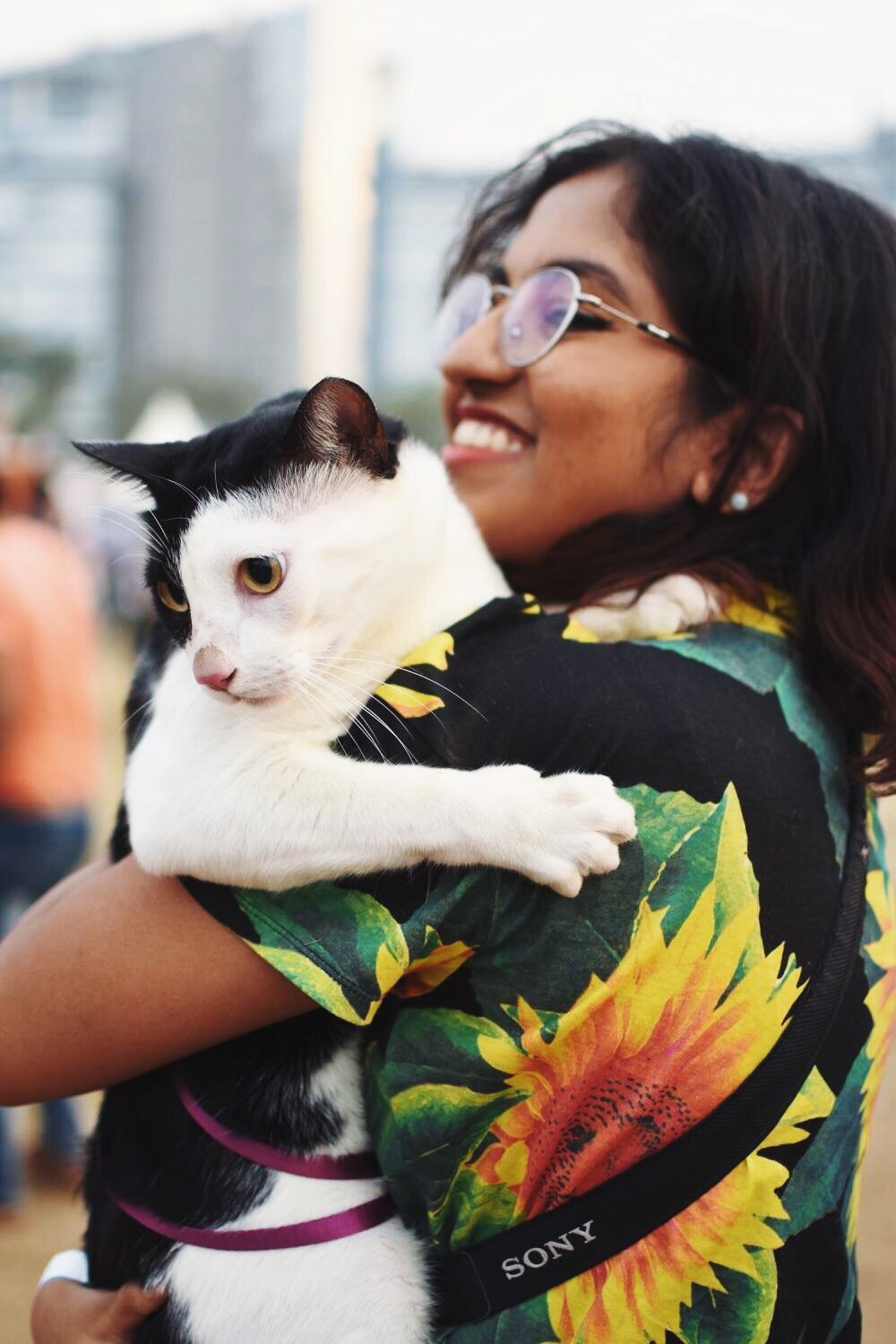 Most people hadn’t seen a cat his size plus he was really chill with everyone touching him, so it was fun to take him out!

watching…  I spent most of December watching this God awful American police procedural called Blue Bloods. The acting, storylines etc. were all just terrible but since I didn’t find anything else to binge, I still watched almost five seasons of it & absolutely abhorred every minute. Guess if there’s one thing I can take into 2018, it’s no more hate watching. I’ll just seek out stuff I like next time.

I also watched the last few episodes of Major Crimes, another (really great) American police procedural. Definitely had very mixed feelings about the last season, since I loved the show from the beginning but hated the serialised turn they were taking. Oh & there were so many tears. It finally wrapped up earlier this month.

listening to… I’ve got pretty obsessed with Portugal. The Man‘s Woodstock album in December. Lots of great songs in there & I had it on repeat for a lot of the month.

cooking… I started cooking again for a bit in December & it was fun! Our NYE meal (made by me with a lot of help from mom) was Mutton Shepherd’s Pie & Japanese Garlic Fried Rice. Both were keepers & the fried rice has already been made twice more in January.

buying… December was a month of a lot of big purchases that I was looking forward to for a while. I overhauled a lot of photo / video equipment (new camera, lens, etc.) & made a detailed video about it. It was very satifsying to buy things that I’d been wish-listing & planning for a while, even if I did have to cut back on other stuff in the month.

2016 was the most transformative year I’ve had in a while. I travelled alone, adopted more cats & learnt so much about myself in the process (I summed it up neatly in this post). In contrast, 2017 was slower, it was about getting into routines, some more self discovery (& some improvement too). It was about getting much more selective in many aspects of my life. Of course I learnt some things too, some practical, some emotional. It was about feeling wise at times & feeling like an very stupid at other times, c’est la vie.

stubbornness… This word characterises a lot of 2017 for me. Blogging & being a digital media creator has changed a lot since I started – Some for the better, but a lot for the worse. In 2017 I decided to be a lot more stubborn about my work. Saying NO to a lot more things if I don’t believe in them. While I’ve always disclosed collaborations or sponsorships, I decided to become much more obvious & transparent with disclosing the same. I faced a lot of pushback from clients & agencies, but my first loyalties are always going to be to you guys. I’m hoping that as time passes, brands will realise that audiences are smart & you don’t have to deceive them to market products.

In my personal life, this just meant not putting up with bullshit & being fine with keeping my friend circle very small and not really doing things I didn’t want to do. I went out a lot less & I definitely met fewer new people. I do want to change that a bit this year, but at my own pace, you know? I’ll always go through periods when I want to go out & want to meet new people and periods when I want to withdraw for a long time. I guess I want to get better at managing my social anxiety & not let in rule my life, so I’m still striving for a balance.

breaking bad habits… Ever since I can remember, I’ve always identified as a shopaholic. I’ve always bought too much of clothing, shoes & makeup. For a longest time, I made the silly mistake of thinking that spending excessively on these things was just a character trait / flaw & that I’m always going to have these habits. In late 2016 though, I wanted to downsize a lot & that made me take stock of just how much I have, how I’ve used so many things I bought just one or two times (or not at all!) & that my spending habits were pretty shitty. For the longest time, I used my job as an enabler to why I’m buying so much (‘I can review the makeup!’; ‘I can film a haul!’, ‘I can do an outfit post!’). So in 2017, I made a conscious effort to buy less of these things – for makeup, I went on a detox / buying ban which I wrote about here. For clothes / shoes / accessories, I just tried to be a little more mindful & buy less statement pieces (which I end up wearing very less of) & more neutral / workhorse / practical pieces. I succeeded at the makeup detox & really want to write a detailed follow up post on that. For clothing / accessories, I still bought a lot of things but I guess I improved? I feel like I shopped a bit more mindfully & used a large portion of what I bought often, which felt great. Moreover, it didn’t feel like I was making some kind of big sacrifice by cutting back & I feel these are changes I can sustain better for the rest of my life.

being vocal… I’ve always been opinionated. But I guess as a lifestyle blogger, there’s kind of these pressure to only talk about frivolous luxuries & stay more politically neutral. In 2017, I got louder with my convictions. The world feel’s like it’s going to hell anyway, I don’t want to be quiet & complacent any longer. So yeah, I got more political. I educated myself more & tried to use my platform for hopefully educated even more folks. Lot of 2017 was rocked by the whole #MeToo movement where so many women got vocal about sexual harassment – something most of us tend to deal with on a daily basis (let’s face it, things are pretty shitty for women in India especially). I got more comfortable with sharing my own experiences too, there was no longer a sense of shame around things that have happened to me. I guess I finally placed the blame where it belonged. I saw a lot of women I know get similarly vocal & it was wonderful – even if most of what we’re talking about can seem bleak & negative, at least we’re talking about it. It’s better than nothing. I will continue to talk about issues that affect me / us as I see fit. And it’s very heartening to see a large part of my audience being very receptive to that. If you aren’t – tough luck, I’m not shutting up (but I’m trying to get better at listening & learning too).

There’s a lot I’m looking forward to this year! I really want to put out a video of my favorites for the entirety of 2017 but it’s proving to be a task to choose products & get them all together & sit & do it. But it’s definitely on the agenda. Our first trip of the year was to Ahmedabad for Uttarayan, but I’m also looking forward to planning the next one & making some bookings!

I currently have a lot on my plate (multiple videos to film, even more filmed ones to edit etc.) & I’m trying to tackle it all without getting too overwhelmed. I’m still very excited & optimistic for the year!

Obviously some crappy stuff happened too but I chose to keep the lift more positive & commemorate things I actually want to remember. What was 2017 like for you? I’d love if you can share your highlights in the comments! x

9 Years Later… What Drives Me Forward ✨

How I Stay Curious & Creative 💫