Magali Vaz January 29, 2011
share
Double Dare is a documentary film by Amanda Micheli released in 2004 that aims to shed some light on the life of television stuntwomen, focussing on two of them in particular. 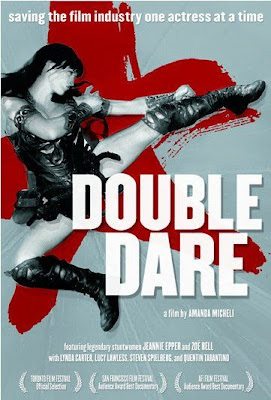 These two stunt women are Jeannie Epper and Zoë Bell.

Jeannie Epper is most famous for being Lynda Carter’s stunt double on the The New Adventures of Wonder Woman television series in the seventies and has been a stunt double on RoboCop and Tanya Roberts’ stunt double on Charlie’s Angels (the original tv show, not the films). She has done the stunts for over 200 television shows and feature films. She is now a grandma of four but she still wants to continue working until she can.

The second stunt woman is Zoë Bell, who got famous for her role as Lucy Lawless’ stunt double in Xena: Warrior Princess. She later went on to be Uma Thurman’s stunt double for both the Kill Bill films too, and recently she has been acting in Hollywood too, most famously Death Proof, Bitch Slap (which I have reviewed here) & Whip It.

I got completely dazzled after seeing the trailer, and being the Xena fan that I am, I had to watch the film.

For Jeannie, it shows some footage of her filming a stunt for Wonder Woman, and how she’s still looking for work. She comes from a background of horses and most of her family is into stunts. For Zoë it wasn’t the same, she wasn’t quite sure what she wanted to become. She is an absolutely amazing stunt woman, other than being an expert at jumping or getting hit and not injuring herself, she’s also trained in martial arts. The opening scene of the film might be my favorite. It features Zoë Bell in a harness, getting ready to film a stunt for the finale episode of Xena (you can see a part of it in the trailer). The stunt involves fire, and it is pretty amazing to see it being filmed, and I marvelled about how different it looked in the episode. It shows Zoë leaving her native New Zealand to go to USA to work, where she lives with Jeannie who helps her get a CV, head shots, etc. She also auditions to be Uma’s stunt double in Kill Bill, and her ecstatic reaction at being selected for the part. I think the film also aims to show you the deception present in Hollywood, like when Zoë is asked to fake her weight (15 pounds less than she is) because “All the actresses do it.” Stunt Doubles are needed whenever there are serious stunt in a film, yet up until recently they weren’t even given credit. They are like the unsung heroes of action films, and it’s great for them to get some screen time dedicated to what they do.
All in all I think this was an amazing film! I absolutely enjoyed every minute of it. I also loved the DVD special features that include exclusive interviews with Renee O’Connor, Lucy Lawless, Steven Spielberg, Lynda Carter, Min Windle & Quentin Tarantino. An added treat!