Magali Vaz February 18, 2011
share
Hi everyone!
I am just back from watching Saat Khoon Maaf (I first blogged about it here). For those of you who didn’t read that post, the screenplay of the film is based on a book by Ruskin Bond called Susanna’s Seven Husbands. The book isn’t out yet but I’ve pre-ordered it. 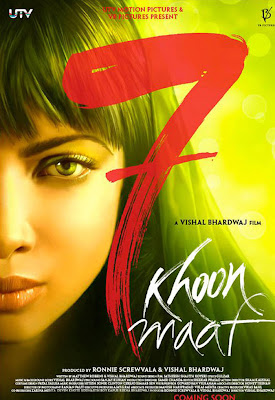 It is the second Vishal Bharadwaj film I’ve seen after DevD (which I saw on DVD & I’m sure a lot of stuff was cut out!)
I think this was the first A rated film I’ve watched in a cinema after turning 18 so yay!
About the film itself: Other than Priyanka, it had a good star cast that made me moderately excited. The basic story is about an Anglo Indian Woman Susanna Anna Marie Joahnnes who kills 7 husbands. (The number is kinda irritating. I found myself counting many times during the film to see how many husbands are dead). I don’t really want to give any spoilers, let me just say that I’m glad I went for it. You’d think the character of Susanna is negative but that’s not the case. I loved the camerawork & cinematography. The film has quite a few goofs/ factual errors, I can’t really tell you about them without spoilers, let me just say you’d think Vishal would have researched better. I was waiting for the Ruskin Bond cameo & I’m glad that it was a decent speaking part & not one of the blink-and-you-miss variety. Thank God!
Overall this is definitely a must watch film for me. Maybe not more than once, though.

Have any of you seen it? Your thoughts?