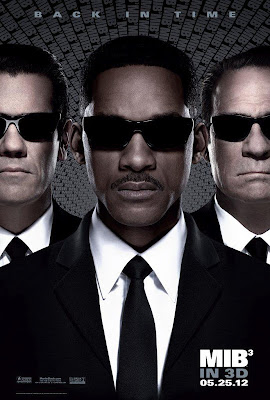 I can’t say I’ve loved the earlier Men In Black films, but with the odd pairing of Will Smith & Tommy Lee Jones, the good special effects, & the always impressive supporting cast & the sci-fi comedy, I have certainly enjoyed the first two films.
The weird thing for MIIIB is that it’s released twelve whole years after it’s predecessor, while retaining the two main stars. I did however really miss Rip Torn as Zed, it didn’t completely feel like a Men In Black film without him. He’s replaced by Emma Thompson, which vaguely reminds me of Judi Dench as M in the 007 films. Perhaps it’s a desperate move to add a strong female presence to the film? While I normally like Emma Thompson, I don’t think she fit the role too well.
Nicole Scherzinger (of the Pussycat Dolls) has a bit part at the start of the film, & the length of her role (& depth of her character) might make Freida Pinto feel good about her own role in Slumdog Millionaire. Will Arnett has a small appearance too, quite like the funny/annoying characters he usually plays. As you may know from the previews, the plot does involve travelling back to the 60’s some scenes are a bit of a visual feast. There’s even a funny turn of events with Andy Warhol! Perhaps the most amazing is Josh Brolin, who plays the young Agent K of the sixties. He may be a forty something playing a 29 year old, but he’s still pretty amazing. Not only are their facial features alike, but he captures the essence of Tommy Lee Jones as Agent K so well, & being young, he’s actually a lot less cynical & grumpy & hence more likeable. What’s most disappointing is the end, it’s meant to by sappy but it actually has a ton of plot holes (that I can’t reveal without giving spoilers).
The 3D is definitely nothing special at all, you can get the same effect watching this in 2D, & save some of your ticket money at that.
Overall not bad from what we’ve come to expect of MIB films, they definitely have no critical merit but fulfill the purpose of entertainment quite well.
Rating ★★★ ☆ ☆ (Three Stars)
Love,

Looking Up in Goa