Magali Vaz June 27, 2012
share
As you may know, my beloved MacBook Pro started malfunctioning a while ago & now has sort of died on me. It’s at the service center for (very very overpriced) repairs. Since I don’t have access to any of my photos in the meantime, I’m going to be focussing on ‘written’ posts for a bit.
My mom raised me to be a very self sufficient person. We don’t borrow stuff from anyone. She taught me that if you don’t have something, you should make do without it. And if you really need it, then buy it. The furthest extent she will go with borrowing is to borrow a pen from someone when she needs to fill a form somewhere & hasn’t carried one.
I have always adhered by that principle. I respect it. If you break something of yours, you are the only one to blame. In eight grade, I only lent a precious vintage horror novel to a friend (it was The Amityville Horror, if you must know). When she finally returned it, the plastic cover of the book was completely ripped on one side. I brought it up, & she told me that is was already done when I lent it to her. Now I may not be the most careful with my stuff, but I am extremely meticulous. I knew she was lying right away, but I dropped it. Besides, the book didn’t mean that much to me.
When I was in eleventh grade, I made friends with a budding photographer on twitter. We met a couple of times, & chatted about photography over coffee. He told me that though he photographs a lot of gigs, he doesn’t have a camera of his own yet, & depends on the generosity of friends. One night he tweeted me, asking if he could borrow my dslr for a rock concert he was attending. He would pick it up from my house & bring it right back the next morning, he promised.I admit that I considered it for a little while, before asking my mother (she bought it for me!) She flatly refused… & I’m glad. Later that night I saw his tweets about how rough the mosh pit was, & how he was black & blue from all that madness. What could have happened to my beloved camera if I had lent it to him that night? I shudder at the thought. Could I have counted on him to take care of it like it were his own? I seriously doubt that. Though I didn’t say anything to him about it, we didn’t really tweet each other after that- I guess he realized I wouldn’t be of much use to him? He’s no longer a budding photographer, he’s even a bit of a twitter celebrity today, & I’m glad to say we’re no longer in touch. 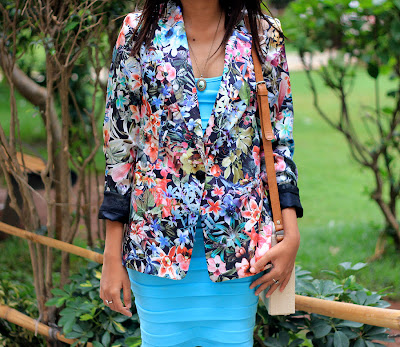 Most recently, I dressed up for a blogger’s luncheon. The highlight of that outfit was my a beautiful new vintagey forever new bag, a gift from my mom when she was on vacation (she always think of me, how lucky am I?!) & a silk floral blazer that I fell in love with in the zara store, & spent ten minutes to my mom trying to justify buying it (she caved of course! She can’t resist my puppy dog eyes She can’t stand to see me grovel for long, I guess). I loved how the outfit turned out so I posted it on my style blog, & facebook too. I got a lot of positive feedback, (especially on facebook) which quite made me feel elated, quite frankly (I have good choice! I was not the only one who fell hopelessly in love with that gorgeous floral blazer. haha). Then when I was on facebook, I saw a message pop up… it was this girl, asking to borrow my blazer & bag for a portfolio shoot. I fumed a little. I didn’t know this girl too well & didn’t even like her (with good reason). Despite her being on my facebook list, we were far from friends (that is why I need to prune it more regularly)… & here she was, just asking me for my precious stuff. I took the less awkward way out of that & blamed my mom. She bought that stuff for me, she wouldn’t be ok with it. And as I always do when I’m angry, I tried to calm down with a little bit of quick introspection, trying to find the real reasons. What if she damaged my blazer? Would she buy me a new one? (They aren’t cheap). And if she damaged the bag, would she fly to New Zealand & get me another one? (It’s already changed season, they wouldn’t even have it available!) But that’s not the only reason I was angry- there was principle involved.
It’s not like I’m completely averse to borrowing/lending, you know? As precious as my analog cameras are to me, I’ve lent them out to friends. I have a photographer friend who has lent me his cameras too. I think it’s ok if you feel like you know the person, you know that they will respect your possessions & lend you stuff if you needed/wanted it too (give & take is very important in any kind of relationship, right?) But call me bitchy, I will not give my things to just anyone because they’re forward enough to ask.
So what are your thoughts on the matter? Would you or wouldn’t you? Do you have a story to share about when you did?

Golden Half – Bandra & beyond