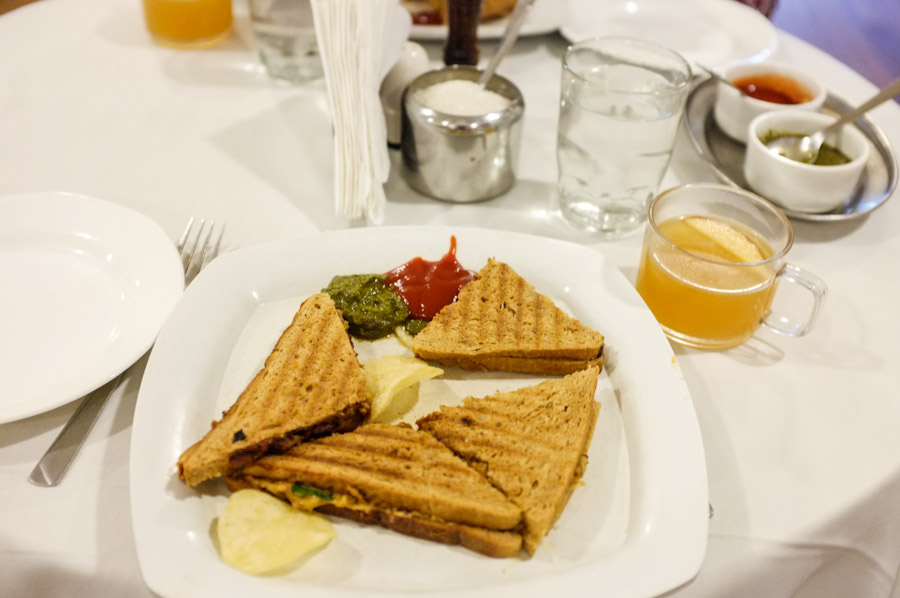 I didn’t always know of tea center. It’s close to Churchgate station in an area I’ve frequented, but not easy to spot. In fact it’s very easy to miss. It doesn’t have any loud signage, & is in a very nondescript government building that also houses the Tea Board of India.

Mom & me were in that side of town a few days ago & decided to check it out. We were there pretty early (a little before 9AM) & were the first people in for the day. The place has been around since colonial times & retains most of the look/charm from that era. In fact, there’s a wall with about ten framed black & white photos from the 1930s/40s/50s showing prominent Indians (including a young Indira Gandhi). There’s quite a lot of seating available, the chairs cushions are covered in jute & pretty comfy. There’s a bell at every table meant to summon waiters… the bell is a cute touch but we obviously wouldn’t use it, there are more polite ways to summon somebody.

I didn’t like the ice tea much, I found it too sweet but then again I don’t like ice teas much – my mom who does liked it a lot.

Even though tea is the main attraction, Tea Center also has a pretty extensive food menu. Since it was very early, the only stuff available was breakfast (mostly eggs) & sandwiches. We chose the char grilled Mediterranean chicken & Shredded lamb & went halfsies on both. They were piping hot when served, more from the meat inside than the grilling. Both were perfect, I would have definitely eaten more if I hadn’t had breakfast at home just an hour previously. The only complaint I have is the way they serve their teas. The tiny tea cups as well as their tall ice glass were all made of plastic! I’m not asking for pretty porcelain cups, but can’t they even afford glass? It really takes away from the tea-drinking experience. Otherwise I’d definitely recommend the place to tea drinkers (lovers) – Good variety, service & prices!