Magali Vaz March 7, 2011
share
So… yesterday I did a post on Mezbaan, a restaurant at Carter Road, Bandra. Today I’m doing a post on A Chocolate Affair, a chocolate themed place at Pali Naka, Bandra.
It’s been quite a while since it opened & I have been dying to go there for months! (especially after seeing this review on Mumbai boss) It finally happened. I was very excited (what could be more exciting than chocolate?!) And because of the Mumbai boss review, I was very eager to try out the hot chocolate. I definitely wasn’t thinking about losing weight when I indulged myself in chocolate for 2 hours. The hot chocolate has some completely weird name (I had to confirm with the waiter that it was actually the hot chocolate!) The cost was

99 & it was available in three different flavors: dark, milk & white. So since we were three of us we decided to order one of each type. The waiter kept telling us with a sour expression that the dark chocolate would be too bitter & the white too sweet. Hence we decided we would get two milk chocolates but I still wanted to try the white. Again he frowned & said that it was too sweet so we got all three milk ones. Thinking about it later I really feel I should have stuck to my decision of getting white & seen where that would have gone because I suspect they didn’t have the other two in stock. 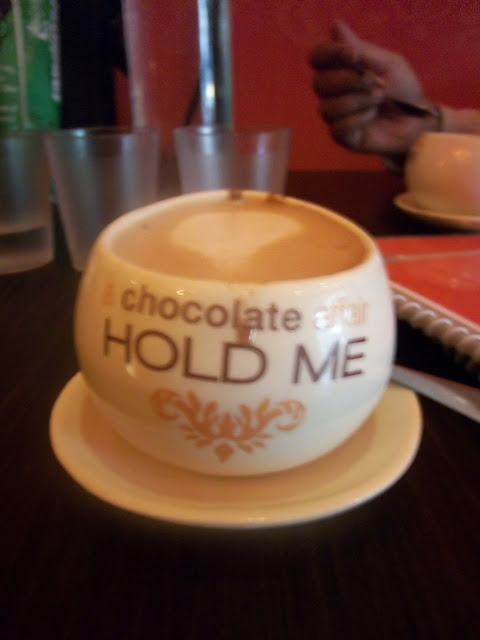 Sorry that the photo is blurry, it’s the only one I have. Anyway, getting back to the actual hot chocolate. The mug had quite a lot of tiny cracks. But forget about the mug, let’s talk about the hot chocolate itself: There was absolutely nothing special about it, it was nothing more than your standard drinking chocolate with a very measly amount of melted chocolate that wasn’t even blended properly. It just stuck to the sides & bottom. I think even the McDonalds hot chocolate is better, it’s been a few months since I last had it but I know for fact it wasn’t more than

30.
Next we ordered the chocolate fondue (I don’t remember what exactly it was called on the menu). They had many different ingredients you could try with the fondue like brownies, strawberries, bananas, turkish delight & a few more that I can’t remember. We chose two brownies & two strawberry. 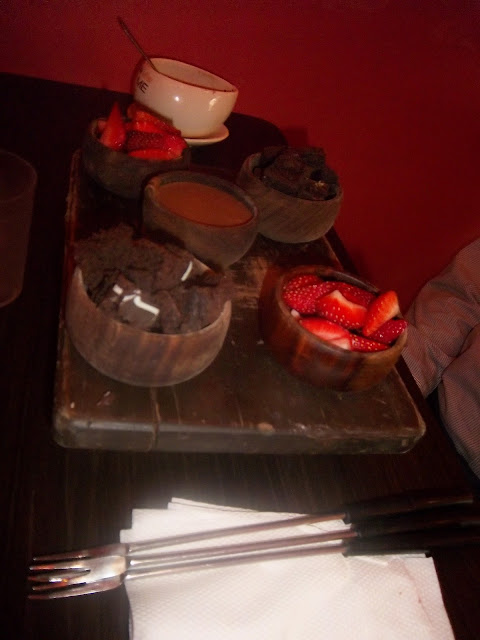 280. It was definitely not bad. My only complaint was with the way it was served. Fondue it supposed to be served in a fondue pot with a little flame or source of heat below so the dip (traditionally molten cheese but in this case chocolate) remains warm. This chocolate sauce was tasty but very very thick. This posed a huge problem because the brownies kept breaking in the chocolate & the strawberry kept slipping off. This problem kept getting much worse as the chocolate cooled & became thicker because our arms actually started to hurt. We had to make sure that the brownies/strawberries weren’t slipping off the fondue fork & then we had to haul it out! But other than this I really liked the fondue. Useful tip: If you’re already stuffed with a hearty lunch & are just here for desserts like we were, then order strawberries on bananas with the fondue because the strawberries were light & yummy (everybody knows what a great combination strawberries & chocolate are!) The brownies were tasty but a tad heavy.
But overall I was quite disappointed with this visit, I am never going back!